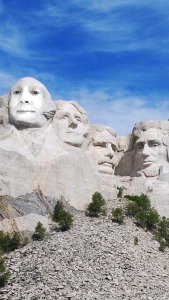 2 thoughts on “Move Over George Washington….Mount Rushmore Here I Come”