You know you’re over the hill and over year head when you actually think you are the one who flew over the cuckoo’s nest.  A few years ago I told my oldest daughter that never getting a break from being a parent of a small child for my entire adult life was driving me insane.  “You’re not going insane mom,” she told me.  “You’re already insane.” 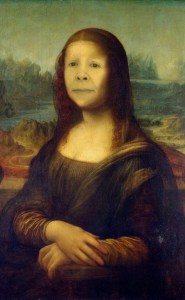 She reminded me of the time I had Lyme disease and believed I was Mona Lisa in a former life.  I even booked a flight to Paris and took her to the Louvre to see my 500-year-old portrait. When I saw it, I let out a bloodcurdling scream.

“Really mother…get it together,” my daughter said wincing with shame.  The French security guard shook his head and wondered whether he should call for a guy with a straight jacket or a gendarme.  I had tripped the edge.

I began to study Italian.  “Silenzio!” I’d say to the kids when they interrupted me. I started to dress only in shades of brown.  Although, I must admit that I drew the line on the hairdo.  I refused to go back to my old wimpy do from the middle ages with that pathetic part down the middle. Seriously, where was a stylist when I needed one?

I made the mistake of telling a person who shared office space with my husband about the former life theory.  “She thinks she’s a frigin’ Mona Lisa,” the woman said in an email that she mistakenly sent to my husband.

“Honey, people are beginning to worry about you,” my husband said.  “I think you need more sleep.”

I haven’t had a decent night’s sleep in 26 years as a mother.  None of my children slept through the night before five months of age.  When the last child was born, the teens would be going to sleep when the baby woke up.  I developed a look of permanent delirium.  Signs of strain set in early with mindless blinking, cracking of my knuckles and grinding of my teeth at night.  After three kids and 12,000 school pickups, 4,000 ballet, swim and karate lessons, and 1,000 doctor visits, I had cracked and didn’t even know it.

Having a 15-year-age spread between my oldest and youngest child, made me a perennial mother. I had my first child too young, and my last too late.  In 29 years of marriage, my husband and I had only two weekends away on corporate business trips.  During all the parent weekends when my two older kids were in college, I had the tension of watching a baby, toddler or a small child.  At my daughter’s college graduation, my youngest disappeared.  Luckily, security found her in the business school twenty minutes later.  Even though there were 10 other relatives there, I was the mother, it was my FAULT!!

“Am I still crazy?” I recently asked my older daughter.

I guess the long term effects of sleep deprivation, changing five-thousand diapers, coupled with ten-thousand playdates with a house full of snot-nosed, whiny, misbehaving little brats is irreversible, undeniable INSANITY!  So why did I decide to do this to myself?  That is a question my friends and I ask ourselves everyday.  But I wouldn’t trade a minute of motherhood for the world.