Ever since I rode the Tower of Terror at Disney World and couldn’t get the spike out of my hair for a week,  I decided to play it safe  and swear off amusement park rides forever.   I figure at my age I’ll wind up with more than a bad hair day.   My back will be as thrown as a football passed  by Broncos quarterback Peyton Manning  in the Super Bowl.

But my youngest daughter  begged me to go to Universal Studios Hollywood where the Harry Potter rides just opened.   The most daring ride is Harry Potter and The Forbidden Journey. 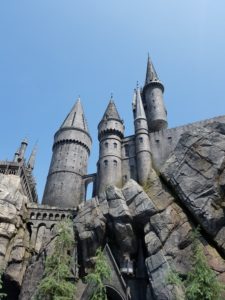 The tip-off  is the warning that says:  This ride is not recommended  if you are pregnant, prone to heart or vision problems, limp, drool, or are a namby-pamby, pantywaist, whimpering wimp who  believes a  warlock is after you.  I had discussed my fear of warlocks with my therapist recently,  so I knew I was done.  Strapped in with a harness that locks your head in on either side, I was jerked around in the dark.

“Stop being a weenie!” my daughter chided watching me flinch at every turn.

It’s the closest  you’ll get to riding  a Quidditch broomstick flying alongside Harry Potter.  You dip, turn, and twist playing this wizarding sport on broomsticks.  I had an unfortunate encounter with Lord Voldemort who put a motion sickness spell on me.  Luckily, during turbulence on the flight to Los Angeles, I had slipped a barf bag into my purse. 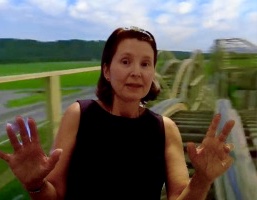 I also  rode a number of rough 3-D rides in other areas of the park where you are tossed around, like the Simpsons Ride where they tell you a killer who escaped from prison named Sideshow Bob is on the loose.   It’s a simulated  ride, so if you have to wait in a long line like my husband and I did, it’s not worth it. Although the line did get shorter when I barfed all over my seat.   I should have bought a bulk of barf bags online.  The ride is also a pain in the neck. Luckily, Los Angeles has a number of good hospitals and doctors.

The UCLA doctor was toying with calling someone from the psych ward when I told him that I had been done in by Lord Voldemort and was afraid a psycho killer named Bob was after me too.  But then he examined my x-rays more closely.

“Is that what I think I see? he blurted out.  He thought he saw  a lightning-bolt shaped scar on the back of my skull.  Holding a rabbit’s foot charm over my heart, the doctor recited the following phrase:“As these words of mine are spoken, let the evil curse be broken!”

He  advised me to avoid the  Honeydukes candy shop at Hogsmeade Village where I had downed one too many Exploding Bon-Bons, Cauldron Cakes, Fizzing Whizzbees and Chocolate Frogs, which contain a wizard trading card in each box.  He suggested a vegan died instead. 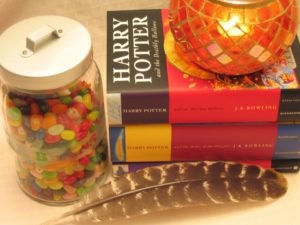 He also thought I should  lay low until Sidebar Bob was captured.  Here I was with my life on the line and all my husband cared about was his empty wallet. “Look at the pickle we’ve in,” he said waving the wallet in my face.

He was peeved that along with other crazed fans, I had spent hundreds of dollars at the Hogsmeade shops on wands, robes, and stuffed owls.

He also had no emergency room copay, so the doctor advised  him to down a pint of Hog’s Head brew before opening the hospital bill.