There comes a point in every mother’s life when she’s told she has to let go.  Kelly Ripa, one of my favorite television stars, is in the news after revealing on her show that she wants to be “overly involved” and help her son Michael get ready for his prom.  She thinks he needs a  hand with the corsage. 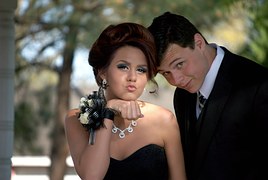 She wants her son’s date to be as happy as the young woman pictured with the man here. Ripa believes her son doesn’t know anything about corsages and if left to his own devices,  he’ll pick a potted plant instead.   She knows her son.

Michael Strahan, Ripa’s co-host on Live! With Kelly and Michael, encouraged her to let her son do it his way saying he’ll learn from his mistakes if he gets it wrong.  Women help their daughters find prom dresses.  What’s wrong with finding a corsage for a son?  I agree with Ripa.   But then who am I to talk?   I’ve been accused of being a helicopter mom.

I wouldn’t let my daughter walk to school, ride the bus, or take a math test without tutoring.   I always bought Velcro sneakers, so she wouldn’t trip.  I’ll never forget the time her elementary school teacher called me in a for a conference.

“Hovering is for helicopters,” the teacher instructed, insisting I was coddling by pushing the wheelchair when my daughter had a broken leg.  My daughter was in a cast and totally incapacitated.  “You have to let her take the fall now or she will later,” the teacher said.

“But I thought she already took a fall?” I said.  This know-it-all, windbag with a swelled helium head, thought she knew something I didn’t know.  Her words floated away.

I resent all this unsolicited advice.  I really do.  I hate the advice, I hate the people who give it, and I hate having to sit there and listen.  Mothers know our children better than anyone else.

And it’s not like kids come with instructions.  It would be so much easier if along with the umbilical cord each baby came with a set of directions.  A simple Post-it note on the baby’s forehead would do. It could say something like:Loves blueberries, has chocolate allergy, should be burped every three or four hours, will be a terrible teenager.  At least this information would give you a heads up.  But no, we go through parenting like a car rounding a blind curve, never knowing if there is a tractor trailer coming at you in the wrong lane.  Let’s face it, if something goes wrong, mothers are the first ones you blame. 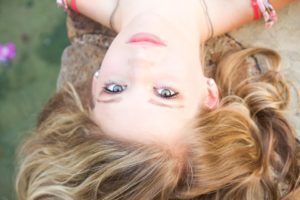 So, when Ripa’s son has his date show up wearing a potted plant to the prom, you better hope it’s being held at the botanical gardens.